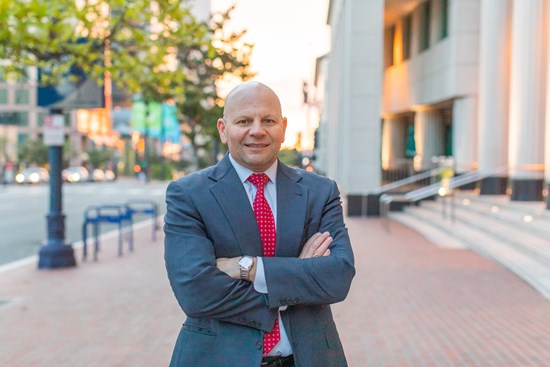 I have a transparent VIEW (Vision, Integrity, Experience/Education, Will) for the City Attorney’s Office, in the spirit of the great City Attorney John W. Witt, to restore the office’s reputation as one of the most effective, diverse, and respected public law firms in the United States.  My VIEW for the City Attorney's office reflects that transparency, limited only by professional ethical boundaries, is the cornerstone of my campaign.  San Diego will have a consistent, reliable, and dependable City Attorney.  My goal is to finally get politics out of the City Attorney's Office.

The vision for the City Attorney’s Office is to regain the citizenry’s trust, and establish a foundation for rebuilding the office’s legal prominence for the benefit of all San Diegans.

1) Politics will be removed from the City Attorney’s Office, and focus instead on the duties, responsibilities, and services the City Attorney’s Office is mandated to provide to both San Diegans, and their elected representatives.  All clients, and client representatives, will be treated with professionalism and respect regardless political ideology or affiliation, and provided the same level of professional service, zealous advocacy, and actionable advice.

3) The Civil Division will directed to follow the law, and follow the law only in regards to relationships with other branches of city government.  Political affiliation and personal relationships (or grudges) will not determine positions on issues of citywide concern, or the quality of legal representation.  Politics will not determine which issues the City Attorney’s Office avoids.  Deputy and Assistant City Attorneys will be directed to engage in complex legal issues, as opposed to sitting on the sidelines, or telling the citizenry that their work is done.  The law, clients, and client representatives will guide the extent of the office’s advice, defense, and proactive litigation efforts.  If they aren't satisfied, we will keep working.

4) Deputy city attorneys will be protected from politics (and bad decisions), supervised appropriately, and encouraged to develop their legal careers according to their skills, abilities and preferences throughout the various offices and opportunities in the City Attorney’s Office.  Currently, the full extent of the office’s attorney development and legal resources are not being utilized.  By developing and supporting Deputy City Attorneys, San Diego will benefit from more effective, confident legal representation.

5) For the Civil Litigation Division, the standard will be zealously defending the city, and handling as many cases in-house as possible.  By developing excellent litigation skills in the Criminal Division, Deputy City Attorney's that advance to the Civil Division will be encouraged and supported to try cases, thereby saving the city millions in outside counsel fees and settlements.

Similarly, the goal for plaintiff's representation will be to lead cutting-edge lawsuits on behalf of San Diego, as opposed to years behind municipal litigation trends.  The goal will be for other municipal law firms to look to San Diego as a statewide and national litigating force.

All San Diegans are our brothers and sisters, mothers and fathers- even those charged with crimes.  While we will zealously pursue criminal charges provable BARD (beyond a reasonable doubt) pre-trial offers, and sentencing options, will be with an eye towards rehabilitation as opposed to condemnation.  Those experiencing homelessness will be treated with respect, and programs will be supported and developed that utilize dignity as the cornerstone of redemption.

I have had the privilege to work for government agencies throughout my legal career from San Diego to The White House.  In the San Diego City Attorney’s Office Civil Advisory Division, my client-department required the most City Council appearances, resolutions and ordinances.  I regularly interacted with city engineers and employees, political leaders, and the City Council. Many of my projects, or assignments, were issues of citywide concern.  In the Criminal Division, I tried more jury trials than any other deputy during my tenure. As a criminal defense and civil litigation attorney, I have protected San Diegans’ careers, reputations, and families.

This experience provides an overview of the diverse responsibilities of the City Attorney’s Office, and how lawyers respond to effective, constructive supervising.  My legal experience, and City Attorney experience in particular, has provided me with intimate knowledge of what will enhance legal services for the city in every capacity of City Attorney responsibility- prosecuting, civil advisory, plaintiff’s litigation and defense, and responding directly to citizen concerns.  This knowledge and experience will be used to establish a long term, nonpolitical foundation to restore the City Attorney’s Office prominence as an excellent public law firm.

I am also familiar with the diminishing effect politics and partisanship has on the office- attorneys don’t explore legal solutions, don’t apply for positions with greater responsibility, and don’t speak out.  Instead, it is the loudest, most dysfunctional voices that rise, violate the public trust, and create terrible legal services and headlines.  This cultivates skepticism, destroys trust, and reinforces political and/or social divisions.  A review of City Attorney’s Office scandals and headlines illuminates that governing the office is a job within itself, and that without proper leadership and guidance, city development and citizen protection suffers.

By far the most educated candidate for City Attorney (note- all degree programs have been completed, and all diplomas issued).  This foundation, in social policy (how laws and policies interact to affect society) environmental law, and litigation, provides a diverse, powerful foundation.  This foundation allows for balancing and understanding complex factors to deliver effective, thorough actionable advice for city leaders.  Further, via a natural intellectual curiosity, the city will not suffer from short sighted, or selfish, advice.

I have the constitution and will to fight on behalf of my clients, and will fight for the City of San Diego.  Promises to defend San Diego from frivolous lawsuits will be kept, and jury trials will be a viable, supported option.  No longer will San Diego look to it’s law firm for guidance, and get referrals to outdated, ineffective memorandums.  San Diego will not be bullied and intimated by outside actors looking to enforce their financial will on our city.  The San Diego City Attorney’s Office will defend the city, and the will of the People. San Diego’s town councils, planning boards, and civic organizations will be supported as they try to provide solutions to San Diego’s problems.  For instance, short term rental ordinances, dockless scooters and bicycles, police body worn cameras, and privacy concerns will no longer be ignored because they may affect political careers

When an issue is difficult, that is where the role of an attorney begins.  It is the client that decides when the work is done, as opposed to the City Attorney saying he/she will no longer engage in a controversial issue.  When necessary, in my office, the City Attorney’s Office will fight legally, professionally, and objectively without personal bias or revenge.

Prosecutorial discretion will be exercised to the safety and benefit of all San Diegans, and not personal political gain.  Criminal prosecution is evolving to not only convict offenders, but to provide them with a path to redemption.  Antiquated prosecutorial policies led citizens down a path of financial instability, unemployment and increased likelihood of recidivism.  Following the path of the judiciary, we will continue to work on prosecutorial reform while protecting and supporting victims, neighborhoods, and citizens.  Novel prosecutorial tools, such as delayed sentencing, stay away orders, and public and volunteer work service, will be increased to restore and protect San Diegans affected by criminal activity, while providing a constructive, redemptive path for offenders.

A clear and transparent VIEW of my platform will provide San Diego with a level of consistency and stability in their legal law firm, the City Attorney’s Office.  The goal is to reduce skepticism, build trust, and establish a long term path to rebuild the office.  Where San Diego politics are evolving, their law firm must also evolve.  The City Attorney’s Office will once again be a reliable, stable platform for the city’s legal services, and no longer the unreliable, political free-radical in city government.